Hermione vs. Kate: What Makes A Hero?

What makes a hero?


In so many ways, I'm not sure that a hero can be defined the way so many of us traditionally think of heroes. Still, so many of us think SUPERMAN or THAT MAN WHO SAVED A KID IN A BURNING BUILDING or HARRY POTTER or EDWARD or anyone who has done anything remotely heroic. We confuse "main character" with "hero of the story." So, for today, I wanted to look at what it means to actually be a hero. If our heroes are actually true heroes, or just people who have done nice things. Or, rather, what it means to become a hero. For instance, take this girl: 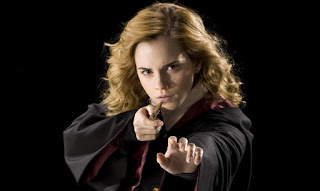 A girl can be a hero? Please don't let Hermione hear you question whether or not she is a strong character worthy of hero status, because I'm sure she could take you down even without her wand. In fact, her strength is one of the reasons I like her so much. Though, the reason I think she is a hero is this: She is a girl who is broken and yet she is not defined by what has broken her, but rather how she has overcome those things. She has seen death, but is not afraid to live. She is smart, but she is humble in the fact that she continues to search for answers. She is powerful, yet she chooses her battles well. She is brave, but she is terrified. She is very much flawed, but doesn't let those flaws define who she is or who she wants to be. That, in my opinion, is the real heroic act here: To be brave is to be afraid.

Bravery, or heroism, is not the absence of fear. It is not ignoring that you are afraid. It is not even, I think, about proving that you're strong and can take on the world even though you probably could. Being brave, being a hero, is about having the strength to be flawed.

So, in some aspects a hero is not made, but broken. A true hero must be broken. It is within those broken moments that a hero finds his/her strengths. That is what I wanted to focus on with Kate and, in ways, Calum.

In LIGHT OF THE MOON, we find that Kate is a character who has been broken. She is strong, both mentally and physically, but her past is a bit of a problem. At the beginning of the story we see that she is almost unwilling to submit herself to any kind of emotion because it goes against what she has come to believe strength is. To her, strength is all about being forceful, strong, powerful, right. She is flawed because she is afraid to be weak, and is unwilling to believe that there is a certain strength in showing emotion - that being emotionally vulnerable doesn't always mean you must be weak. She does not understand that one can have emotions without being emotional. To Kate, there is no emotion found in heroism.

And then she meets a boy. Calum.

Calum's character is all about emotional strength. He is thoughtful, and in that he is brave. Like Kate, there are things that have broken him in the past and things that he would rather forget. Unlike Kate, however, he chooses to deal with these things in ways that convey emotion. He is also broken, but in very different ways than Kate. He thinks deeply, and in that he is strong.

In LIGHT OF THE MOON, I didn't want to have a traditional heroic figure. That's not real life, and not at all realistic. In Calum, I wanted to show how there are strengths in emotions. In Kate, it was more about proving that a girl (much like Hermione) can be just as brave and heroic as a boy. I wanted to show that boys are allowed to have emotions, and girls are allowed to be strong. That we can have emotions without being emotional. That we can be strong without being heartless. That love is not weak, but that you don't have to be helpless to find it. In ways, Calum and Kate are opposites of each other, and so they fit perfectly together without being completely perfect apart. They learn from each other. They grow as the story does and, by the end, are the same characters they started as but very much different.

Mostly, I wanted to show that a hero can be found in anyone, but that a true hero is broken before he/she is made. Truly, maybe a hero is only a hero when they have something to be heroic about. And, in this story, both Calum and Kate are broken and made from love.

LIGHT OF THE MOON
Out Tuesday 11/6/12
Check out exclusive secrets posted only on facebook this week: HERE

Posted by David James at 3:30 PM
Email ThisBlogThis!Share to TwitterShare to FacebookShare to Pinterest
Labels: How I Write, Light Of The Moon, Newsworthy, Opinions