The awesome Thomas Winship has a new book out today called VAEMPIRES: ZOMBIE RISING. Check out the blurb below and make sure you check it out! =) 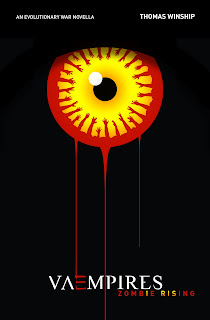 "The tale of the Evolutionary War resumes in Væmpires: Zombie Rising...
Væmpires have taken control of twelve major cities. Their leader, Vielyn, seeks the atomic weapons that will bring the rest of the world to its knees. Vampire forces are reeling. As Linq and Ray race to the royal estate to rendezvous with Cassandra and Daniel, the princess is captured and Daniel falls. With the fate of world shifting to their teenage shoulders, Linq and Ray must deal with tremendous losses while battling a most unexpected—and undeadly—new foe."

He is currently working on the next installment of the Væmpires series, which is scheduled for a 2013
release.


Posted by David James at 6:00 AM
Email ThisBlogThis!Share to TwitterShare to FacebookShare to Pinterest
Labels: Newsworthy