Guest Post by Christopher Waltz: “Out of the Closet and into the Pages: Gay Characters in YA Literature”


Guest Post: “Out of the Closet and into the Pages: Gay Characters in YA Literature”
by Christopher Waltz

"When David James asked me to write a guest blog post about diversity in YA lit, not only was I excited and honored, but it also got me thinking. I did internet research, dug through my own collection of Young Adult novels (which is pretty hefty), and had discussions with groups of my friends and fellow writers. We all ended up with the same question: Where are all the gay characters in YA lit? Fans of Young Adult fiction read these stories and witness the inevitable, blossoming love between the main characters. Katniss must choose between Peeta and Gail in The Hunger Games. Bella must choose between Edward and Jacob in The Twilight Saga. Vlad must choose between Meredith and Snow in the lesser-known, but still amazing The Chronicles of Vladimir Tod. We hardly (if ever) see characters dating or even acknowledging feelings for other characters of the same sex. Katniss doesn’t unexpectedly fall for Glimmer, the District One tribute. Bella doesn’t start having feelings for one of the female Cullens, such as Alice. Vlad doesn’t wrestle with emotions involving his sworn enemy, Joss the vampire slayer. But why not? One of the many answer to this question, unfortunately, is because it makes people uncomfortable. Over the past few days, I’ve read several articles, from blog posts, to pieces in The New York Times claiming gay characters in YA lit simply just aren’t wanted, and generally make people feel “weird.” Some of these articles even chronicle real-life experiences of authors trying to get their work published, only to be rejected for having gay characters, or at the least, asked to “straighten them out” to reach a broader span of readers. The only thing I could find myself thinking as I read these stories was “What a load of bull!” In fact, I’m still trying to wrap my head around how making all the characters the same (i.e. straight) opens the story up to more readers. In my apparently skewed opinion, having a wider range of characters, with varying sexualities, would inevitably open the story up to a wider audience. And then it hit me. Having gay characters in stories, writing gay characters into stories; it can be tough. Members of the gay community, like most other minorities (and even some majorities) face certain unfavorable stereotypes. One struggle, I would assume, for many authors, is how to organically insert a proud, realistic gay character into their story without creating a “I’m here! I’m queer!” character parading about during the apocalypse. This was something I particularly faced while writing Ivy League. I knew one of my two main characters, Gabe, was gay, I just didn’t know how to say it. I drafted out ideas, considered dropping subtle hints, and came up with countless ways for my readers to know his sexuality without making it the main point of the novel. By the time I’d finished writing, editing, and was getting ready to publish, there was really nothing in the story solidifying Gabe’s sexuality: he was just a normal guy. But that was it. That was what I had been searching for the whole time. Gabe was just a normal guy… who happens to be gay. He didn’t need a huge coming out party. He didn’t need to remind other characters of his sexuality every chapter; it was just a part of who he was. In the end, it may be a long time before we begin seeing Young Adult bestsellers with openly gay characters that haven’t been “straightened out” by the publishers and editors, but like recent events in real life, I feel like big changes are coming, and hopefully one of those changes is acceptance." 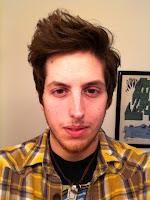 Christopher Waltz was born in Indiana in 1987 and promptly began writing once leaving the womb. While this is a complete lie, Christopher did begin writing around age eight at which point he penned and illustrated a sequel to the film "Jumanji." Since that time, Christopher has continued writing and obtained a degree in secondary education from Indiana University's School of Education. He currently works with a non-profit organization and writes. His novel, Ivy League, was recently published.
Posted by David James at 9:00 AM
Email ThisBlogThis!Share to TwitterShare to FacebookShare to Pinterest
Labels: guest post, Newsworthy, Opinions