On Multiculturalism and Diversity in Marie Lu's Legend and Prodigy

There's something to be said about Marie Lu's quiet exploration of multiculturalism and diversity in her novels Legend and Prodigy. Lu does a fantastic job of creating a world that feels natural and real all while being completely filled with characters from different backgrounds, races, and beliefs. Characters believing different sets of political variations are at odds, while some of the same members of each party are working together. Black is not white, yellow is not gold. And yet everything is exactly as it should be - there's a very real sense of REAL hidden within Lu's writing. What I mean is this: Lu writes with certainty that the world is a diverse place filled with people of all colors, races, religions, etc etc etc. Instead of making a very specific point, instead of writing a novel using the specifics of a certain character's race or religion or views or whatever, she includes all of this in multiple characters - and by doing so creates two novels filled with more truth than many more specific ones have before. She nails it perfectly. 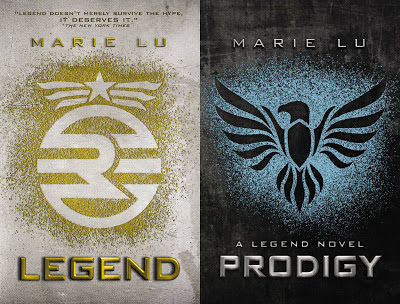 The senses of multiculturalism and diversity in Legend and Prodigy don't slap you in the face. They do not scream for you to notice them. They're not even (for the most part) a major part of the story. They're just there. Very present in the background. And for that Lu should be proud.

These things should just be.

Equality should just be.

They don't need to be loud to make a difference.

Both Legend and Prodigy are filled with political problems, high-stakes action scenes, and romance. The good kind of romance. The kind that sneaks up on you. That makes you swoon when you least expect it. That kind. In all honesty, I really enjoyed both Legend and Prodigy. Both have great plots. The writing is fluid and very good. I loved the characters, Day and June, and Lu's voices for each stayed constant and connected. But my favorite part was how Lu created her diverse world filled with mentions of equality, racial diversity, and her awesome fusion of cultures.

Legend and Prodigy are diverse not because they want to be, but because they simply are. In that, they're both a lot like the real world. Like living or breathing or just existing. There's not a sense of morals being preached or ethics being thrown, but instead we're left with a feeling that this is okay - this diverse and political and multicultural world is how it really is. How it's supposed to be.

Again, there's something wonderful to be said about books like Legend and Prodigy that present diversity, multiculturalism, and equality in such natural ways that the reader believes life should always be so colorful.

And really, it should.

We need more books like these two.
Posted by David James at 10:30 AM
Email ThisBlogThis!Share to TwitterShare to FacebookShare to Pinterest