As part of the 2014 Halloween Book Trail, I thought it would be fun to answer some Halloween questions on the blog. I'm on team The Woods (okay, there aren't really teams, but it sounds cool), so make sure to follow and check out all the awesome posts this week. This is the last stop of The Woods section of the trail, so be sure to follow the link to the final quiz at the bottom! 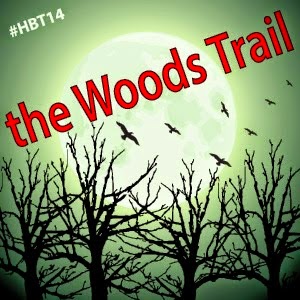 My latest book, BETWEEN THE STARS AND SKY, is a YA romance that follows Jackson Grant and Sarah Blake as they fall in love, out, and in. The entire story surrounds itself around a secret and dangerous game known as the Firelight Fall. It's deadly. It's romantic. And it's legendary. In honor of that dangerous fall, here are some questions and answers surrounding the book and me.

1) What scares the pants out of you?

SPIDERS AND SNAKES. No need to say more than that.

Slime, I think. In my very first novel, LIGHT OF THE MOON, there is A LOT of blood and things covered in blood and dangerous scenes involving blood. It's a romance. *evil laugh* But really, I'm pretty sure I'd rather be covered in slime than blood. Wouldn't you?

3) Do you legit believe in ghosts and things that go bump in the night?

Serious moment: I don't know. Does anyone? I think after writing so much about legends in BETWEEN THE STARS AND SKY and about ancient prophecies in LIGHT OF THE MOON, I have to think there's something else, I'm just not sure exactly what. It's a big world, and what I am sure about is that we've only scratched the surface of what it holds. Plus, have you ever watched AMERICAN HORROR STORY!? I MEAN C'MON.

4) If you were stranded on a deserted island or haunted house, how would you survive?

Um. I would eat books. Is that an option? Can you survive on books? I'm pretty sure you can.

5) What is your favorite sentence from your novel?

From BETWEEN THE STARS AND SKY, I have a few. Here is one I truly love:

I think it really shows how we're not always ready for something, but who is? Who is really ready for change? For love? For anything? We can't see the future, and so sometimes we have to be brave enough to just jump or fall.

6) What magical creature do you want to be?

I'm not going to lie. I'd love to be a vampire. I know. I KNOW. But c'mon. They're pretty cool and they live forever and (most of the time) they have cool powers. If not, I'd be some kind of wizard because who wouldn't want to have superpowers. Or an X-men. Or Harry Potter. I want to be an wizard who is part of the X-men and also lives forever. Score.

That's it! Be sure to enter the quiz over at YA BOOK TRAIL so you can enter to win a ton of really awesome giveaways and prizes!

Posted by David James at 8:00 AM
Email ThisBlogThis!Share to TwitterShare to FacebookShare to Pinterest
Labels: Halloween, YA Book Trail