On The Greatness of Gatsby (The Movie) 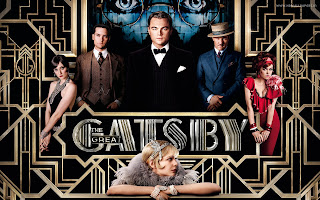 The Good: I'm not sure why so many critics and readers have been so apprehensive about another adaptation of The Great Gatsby, especially with such a talented team attached to it. The acting in this film is, as expected, incredible. There has never, ever been a better Gatsby or a more beautiful "fool" of a Daisy. In all honesty, the acting was the best part of the film. That, and the script that seemed to be an extension of the book itself - with lines literally coloring the screen. Those worried about the faithfulness of the film to the novel should rest easy, because while the coloring of the film may seem a bit different than what we're used to, even Baz Luhrmann's art direction stays true to the definition of the Roaring Twenties. In fact, Luhrmann's crew spent quite a bit of time researching buildings and inspiration pieces that Fitzgerald himself would have seen. The sets are equally fantastic and true.

EDIT: I've read a few reviews that claim the movie ignores the "heart" of the novel, and I completely disagree. One look at (2013) Gatsby and Daisy together and I wonder how anyone could question the complicated love they have for each other. If anything, this movie lives from the hearts of its actors.

Don't be afraid of something just because it looks a bit different, people. Look beneath the surface.

The Bad: Okay. Not so much bad, because I really did enjoy Gatsby. Still, I wish there would have been a stronger focus on art direction. Yes, I said it. With the film already being directed by Luhrmann, I was prepared for a Moulin Rouge-type spectacular show. And I got it. Sometimes. Sometimes, however, the madness of the Roaring Twenties just looked like a fun costume party. Which, actually, I guess it probably was. 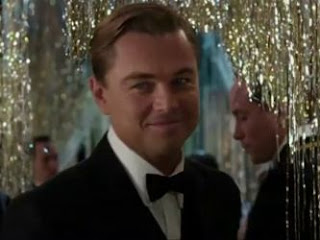 Specifically, the party scenes came off as lacking (see above), with some of the decorations looking like they escaped from a Party City Sweet Sixteen party instead of a million dollar Gatsby party. Luhrmann decided to focus more on story rather than stay more than a few seconds on the jazz performers. For that he should be proud, because it surely pleased critics and stubborn readers. Those jazz scenes, however, are the places in the film where I wanted more. And while the art direction of the film was still incredibly beautiful, nothing compared to shots like this:

Or when we first meet Daisy. When she is giggling in a room filled with white curtains. That scene is pure movie magic, as though the book were living and breathing on screen. I wanted more like that. And while it's clear this is a more serious Luhrmann piece, though it does have a lot of comedic moments, some of the film felt uneven.

Like the soundtrack. Jay-Z's attempt was ambitious yet lacking (movie soundtrack vs. album soundtrack). Possibly the oddest part of the film's soundtrack was when "Crazy in Love" began to play during an already comedic (and romantic) scene between Gatsby and Daisy. Most of the soundtrack (except for the gorgeous and completely appropriate "Young and Beautiful") just felt off. There were beautiful moments when jazz met art and the Roaring Twenties came to life on screen - and a lot of those happened when the soundtrack was completely modern and filled with R&B beats and style - but a few times it just felt oddly flat. Especially after the beauty of the trailer.

Still, this movie is beautiful and filled with accurate imagery that is also seen in the novel. Daisy always wears white. The green light becomes not only a metaphor for love, but life and the American Dream. The iconic Gatsby is stripped away layer by layer. And even Nick, the narrator of the story, is shown in the film as being lost to this incredibly intoxicating world of jazz and love and alcohol.

Posted by David James at 10:48 AM
Email ThisBlogThis!Share to TwitterShare to FacebookShare to Pinterest
Labels: Movie, Newsworthy, Opinions