Today I have the wonderful opportunity to interview Helen Boswell, author of the YA novel MYTHOLOGY. Boswell, it just so happens, was also the editor for my own novel, LIGHT OF THE MOON. For me, her novel MYTHOLOGY read like a cross between Richelle Mead's Vampire Academy series and Rick Riordan's Percy Jackson series. I loved Boswell's voice and the way she balanced humor and serious moments perfectly.

Official Synopsis: "Hope Gentry doesn’t believe in Fate. Born with an unusual power to see the dark memories of those around her, Hope just wants to be a normal teenager. But on the first day of her senior year of high school, she finds herself irresistibly drawn to a transfer student named Micah Condie. At first glance, Micah seems like a boy that most girls would dream about. But when Hope's powers allow her to discover Micah's darkest secret, she quickly becomes entangled in the lives of mythical entities she never dreamed existed. Was this her destiny all along? And will her powers help her survive the evil of the Demon Impiorum?"


1) What inspired you to write your first book?
Ever since I was 10, I loved to write short stories. I never completed a novel until MYTHOLOGY, however. I was inspired by one of my own rambling thoughts almost three years ago: What if we don't know truly what we are? What if we search for answers but don't find ones that make us happy -- what would we do with those answers? I became sort of possessed with this idea until I had written MYTHOLOGY.

2) How did you come up with the title of MYTHOLOGY?
The title matches one of the main themes in the book, that of The Fates and whether or not we are tied to our own actions due to things that we are born into, or whether we have ultimate say. Plus, it looks cool and symmetrical on the cover :)

4) Is there a message in your novel that you want readers to grasp?
There are several, but perhaps the main one is that we all have the potential to be anything that we want to be, and that applies to both ends of the spectrum ("good" versus "evil"). Many things are out of control and set in motion by events that preceded them, but we ultimately all do have a choice in what we make out of our situations. Do the best that you can do given the hand that you're dealt in life.

5) You've talked before about strong characters. How do your characters showcase strengths?
My main character Hope has had some terribly dark experiences that have shadowed her past. Despite this, she is willing to maintain "hope" (no pun intended; she hates that) and take a chance on people. She speaks her mind, acts according to her own directive, and is not afraid to do what she can to help those she cares about. She does struggle with the fact that she is almost constantly privy to everyone's secrets, but she figures out how to filter through these and help when she should.
Micah is morally strong despite being born into a terrible heritage. No more spoilers for that one. :)

6) Are experiences based on someone you know, or events in your own life?
Most of the story's actual events are purely from my imagination. But the story does take place in Buffalo, New York, which was my stomping ground for almost nine years. I wanted an urban fantasy, and the city served as the perfect backdrop for all of its events.

7) What books/characters have most influenced your writing most?
Cas Lowood from Kendare Blake's ANNA DRESSED IN BLOOD. Not only was the story awesome (a teenage ghost hunter - what more do you need), but Cas had one of the most authentic voices that I have ever read. I really felt like I KNEW him from reading the book through his point of view. I hope that readers will be able to do the same with Hope in mine.

8) If you had to choose, which writer would you consider a mentor?
Christopher Farnsworth, author of Blood Oath, The President's Vampire, and Red, White, and Blood. We met early on in my writing career due to a mutual friend (my ex-boyfriend from college, if you must know) and he read my very first draft. His suggestions helped me become a better writer. Specifically, he suggested I write my story from first person present (because of the elements of suspense) and suggested upping it a notch in terms of what crazy paranormal abilities my characters could have. After all, this is MY world, right? :)  Will forever be grateful to Chris for these things.

9) Are there any new authors that have grasped your interest?
Well, there is a very promising new author by the name of David James. I think I will just put in a plug for him right now. (Thanks, Helen!)

10) What are your current projects?
The sequel! I'm writing the second book of the MYTHOLOGY series from both Hope and Micah's perspectives in alternating chapters. It should be out by Christmas, 2013.

11) Do you have any advice for other writers?
Don't be an island. No writer can publish a book single-handedly, and I'm not just talking about agents and publishers. I had so many people help me out with all aspects of writing and publishing, and I try to give back to other writers as much as I can. That's the way it should be.

Thank you, David James, and many congratulations on the release of Light of the Moon! I LOVED IT. 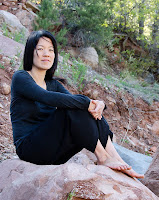 Helen Boswell earned her Ph.D. in Biological Sciences from the University of Buffalo. She lives in southwest Utah with her husband, two young sons, and dog. MYTHOLOGY is her first novel.

Check out Helen at:

Posted by David James at 8:00 AM
Email ThisBlogThis!Share to TwitterShare to FacebookShare to Pinterest
Labels: Interviews, Newsworthy