Those of you who, like me, follow Maggie Stiefvater's blog know she has a rule where she only blurbs about books she loves. LOVES. All caps. Books that move her. Make her cry. Sob. Give her chills. Stay with her long after the last page has been read. Books that are so amazing that they are five stars all the way and nothing less.

So, I'm doing this. I'll only be blurbing books that are, to me, five stars all the way.


Side note: I've also rediscovered "well played. well played" so I'll be using that a lot. Everything is very 90's to me right now for whatever reason, and I have a huge urge to watch Space Jam and Power Rangers.

Down to business. I just finished reading (just = one month ago) an ARC of a book that Veronica Roth says is "unlike anything I've ever read." BAM: 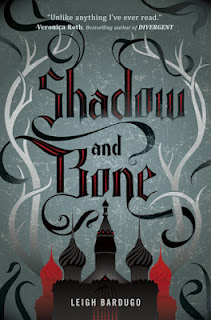 I agree, Veronica! Although I also felt like there was something about SHADOW AND BONE that was very familiar, and I enjoyed the fact that it felt, in places, like it was a story I knew already. This, I think, is because the characters and the world were both so well written that it just felt like home. SHADOW AND BONE is not a love story, but there is love. There is love between family, love between friends, love between strangers, and love that really maybe isn't love just yet. I love that nothing was black and white in this book, but various shades of dark. There was mystery. There was suspense. There were characters I began to care about, and characters I hated. But my favorite part was the world. Bardugo created a world that was filled with shadows and characters that moved them. She created a world so unique and creative and dangerous and different that I wanted to live in it. More importantly, Bardugo's world in SHADOW AND BONE felt so vast that it was almost incomplete. She created it so well that you, as the reader, know there is more to come. You know there are places in this world just waiting for you. You know there are characters you have yet to be introduced to. You know there will be love and heartbreak and danger. And you can't wait to be pulled back in.

The good news? This is Book 1.


Posted by David James at 10:33 AM
Email ThisBlogThis!Share to TwitterShare to FacebookShare to Pinterest
Labels: Review