There was a recent article in US News and World Report that discussed the idea of profanity in YA literature and mulled around this question: "Is it time to rate young adult books for mature content?" Considering the fact that so many YA authors support each other tooth and nail, it's not surprising that many of them, like the bleeping hysterical Kiersten White, have begun to voice their opinions on the topic.

So many things in life are situational. Which is why, perhaps, we often say things like "you just had to be there." Things change when we try to explain them. It's beautiful in a way to be part of a moment like that, when you know it can only be truly explained to the people you're with, or maybe even just you. But sometimes we can't explain things. We can only live them.

What is great about so many authors of YA literature today is that they write about these real moments, the good and the bad, and they're doing it in a very real way. Gritty. True. Powerful. Yes, a lot of the more popular YA novels are fiction or fantasy based, but a lot of the situations portrayed in those bestsellers have the possibility to become very real. This article, for an example, stated that there are around "50 f-bombs" in one recent GOSSIP GIRL novel.

Well. Really. There should be.

Side note: Brigham Young University actually spent cash on a study that counted the amount of profanity in YA novels.

GOSSIP GIRL is a novel series about teenagers, depicting moments that could be real. And yes, although the things seen on the television series and in the book series probably don't happen to normal teens (or even normal adults), the way they talk and dress and feel and love are all very much real in the lives of many young adults. Considering that, isn't GOSSIP GIRL just mimicking the language so many teenagers use today? Shouldn't this argument be flipped?

If so many YA novels are accurately portraying young adults (and they are), shouldn't we be more worried about how our young adults got like that, instead of attacking the authors that got it right?

Is it okay for young adults to love as deeply as we write?

Who really knows. It's all a matter of opinion. But I do know this: The more adults pretend tough situations don't exist, the more they do. Young adults find ways to seek out that information (I know I did) we hide from them, and if we're so afraid that they'll become a Gossip Girl or Boy, then avoiding or banning something just because it's not what we agree with probably isn't the answer. Like this article mentions, I think that parents need to read what their children read. With the variety and the quality of YA books on the market these days, it's so easy to pick one that lends itself well to any tough conversation. We should not forget the fact that we have books like SPEAK by Laurie Halse Anderson, or CRANK by Ellen Hopkins, or BEFORE I FALL by Lauren Oliver - books that are as real as they are difficult as they are truthful. Books that swear, not because it's cool or because they can, but because they must. Because they show us the possible consequences of real actions. Use these beautifully written difficult books to talk. And, like Gayle Forman mentioned on her blog, if you have questions or concerns about content go to your local Barnes and Noble and ask - or read the book yourself first. Or look online - Amazon has age ratings right next to the page count. It's so simple to be informed these days that there's really no excuse not to be.

But this whole argument is a matter of opinion and personal choice.

I don't swear often. I don't feel like I need to.

But, just like Mrs. Weasley, I feel there are situations that arise when swearing is certainly the right way to go. After all, if and when I'm a parent, and an evil wizard attacks my daughter, you can bet I'll whip my wand out and scream this:


"NOT MY DAUGHTER, YOU BITCH!" 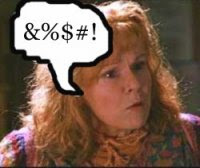 "NOT MY DAUGHTER, YOU &%$#!" just doesn't cut it.
Posted by David James at 11:03 PM
Email ThisBlogThis!Share to TwitterShare to FacebookShare to Pinterest
Labels: Articles, Newsworthy, Opinions, Quotes