Four Things I Learned About Veronica Roth After Reading Allegiant

After reading Allegiant, here are four (get it?) things I've learned about Veronica Roth.

1) Veronica Roth is brave, incredibly so. To end a series is an impossible task, because even though the books have been written the characters find a way to live on in our minds. For an author, a series never really ends. The story might end, but there are always new readers, new thoughts, and random scenes that appear in your mind. Ending a series is brave. 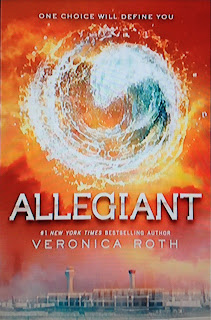 2) She knows her characters and is not afraid to show their faults. She is not afraid to tell the story of a girl who is both strong and weak. She is not afraid to tell the story of a boy who is both strong and weak. And I think that is amazing. Men and women, we are all everything at once. We are not just one thing, strong or weak. These are brave things to feature because readers tend to look at (some) flaws negatively - especially when it comes to ideas about sexism and gender equality. This is why I will always love Tris and Tobias - because they are everything at once, as it is. I've found more comments from readers of Allegiant that the ending "blew" because Four appeared weak. And if you've read the ending, you'll know (hopefully) why comments like this are ridiculous. Fear, tears, sadness, love, hope, and loss are never signs of weakness no matter who wears them. Boys will not be boys and girls will not be girls, at least not in this series - and that is something wonderful.

3) Veronica Roth is brave because of that ending. Because it made sense. Because it was vivid and real and raw. And because the ending stayed true to the characters. More importantly, knowing how readers would react makes Roth an even braver soul than most. She knew. For the most part, authors and publishers and agents and editors always do. Knowing that and still writing something because it has to be written is brave.

4) Veronica Roth is brave. The end.

And in the end, I don't know if this was the ending I was hoping for, but it surely was the ending I needed. The one that was meant to be. The one that should have happened. And the one that, no matter what, will teach us to live freely and move forward and, like Tobias says, "mend each other."
Posted by David James at 11:20 AM
Email ThisBlogThis!Share to TwitterShare to FacebookShare to Pinterest
Labels: Articles, Newsworthy, Opinions