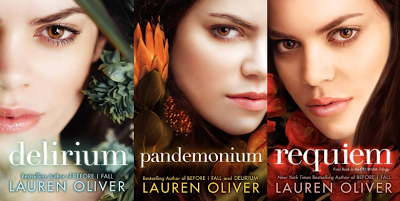 In Delirium love is found.

In Pandemonium love is lost, and found again.

In Requiem we see the depth of the world Lauren Oliver created. This: a love song that sometimes is nothing more than a whisper of what you think it should be until you realize the entire time you’ve been listening to love screaming at you so loud it was only pretending to be quiet. We see love between friends, between strangers. Between people who think they are in love but aren’t. Between lovers and parents. Different kinds of loves layer Requiem, so deeply woven together the pieces are sometimes difficult to spot. As it is for so many of Oliver’s characters, sometimes we don’t even see what love is until it’s too late.

But it’s there. Waiting for the walls to fall, love is there.

This trilogy has always been about love. In Delirium Lena finds love. In Pandemonium she finds it again, though a different love is lost. In Requiem she resists. Oliver creates a quiet kind of war built on the platform of a louder one - love upon hate, cured upon uncured. She takes the political and very real aspect of a resistance and layers on love until we are left with a war between those who love and those who don’t. Though we get tastes of loudness in Pandemonium and Requiem, Oliver’s is a quiet kind of war where the casualties number even more - because they forget. They love and leave and are gone. And underneath this war Oliver has created between the loveless and the lovers, there is this: Lena and Alex and Julian. First loves, second loves, all tied together as one because love is rarely a simple thing. It’s never so black and white as we make it. And this trilogy focuses on that, how love is not made up of firsts or seconds or even thirds, but just is.

Love stirs jealousy, envy. Happiness and faith and greatness. Love seems unstoppable, and yet it stops from time to time just to breathe, to change. To mold into something different than what it was. And then it’s back to this: Love is a force of nature, and in this trilogy it is a character just as real as Lena or Alex. Perhaps even more real.

Still, we must remember that this is Lena’s story. It is about war, but a different kind of fight. At times, like in Pandemonium, we get the feeling that circumstances and other characters are much bigger than they seem, that we are only seeing a tiny picture in this harsh world of forbidden love. But really, isn’t that the point? This is Lena’s story. Her loves, her hates. Her eyes seeing her world. And although we hear Hana’s voice in the end, it still comes down to this: Lena and the loves she has and doesn’t. Her love for Hana and Julian. Her mother. Alex.

Her beginning. Her end.

“Direction, like time, is a general thing, deprived of boundaries and borders. It is an endless process of interpretation and reinterpretation, doubling back and adjusting.”-Requiem

Some things never change, some always do. Some even change like whispers on the wind so they’re different without even meaning to be. That whisper is what moves the Delirium trilogy along.

This: a whisper of the hope of love.

This: a requiem of love.

This ending is just the beginning. Of life. Of freedom. Of love.

Of life beyond the walls.
Posted by David James at 5:00 PM
Email ThisBlogThis!Share to TwitterShare to FacebookShare to Pinterest
Labels: Opinions, Review